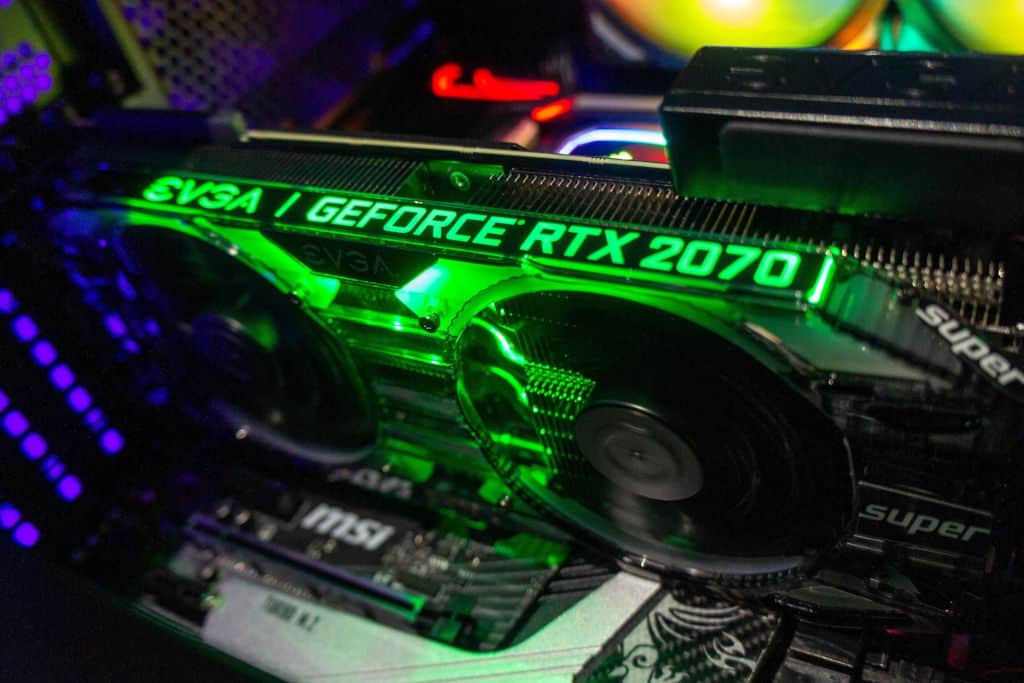 Are you mining, gaming, or rendering something and your GPU usage is high? Or is your system on idle, doing nothing, and still getting high graphics card usage? Let’s see if that’s good or bad and what can you do about it.

Is High GPU Usage Good or Bad? Unless idle, it’s completely safe to have a high GPU usage for prolonged periods, whether mining, gaming, or rendering. Your graphics card is built to be used fully at 98 to 100% for years, especially if you’re doing some GPU-intensive tasks.

High GPU usage means your GPU is being properly used. This is normal, but high CPU usage may not be.

When gaming, unless it’s an older game, it’s expected to reach 90-99% of GPU usage. High GPU usage is generally what you want in gaming, but if you’re hitting only 80% and getting 55fps in-game then it may indicate a CPU/RAM speed bottleneck.

You can use various software to explore and see what’s causing high GPU usage, test your GPU and lower the GPU usage:

If doing rendering, playing games, or mining, then high GPU usage of 70, 90, or 100% is totally fine, even for prolonged periods. However, high graphics card usage while watching videos, or simply on idle is not good.

In this case, you may want to explore to see what’s causing it. I’ve laid out some fixes below.

Again, if doing any of the mentioned demanding tasks, then high GPU usage is completely safe and expected. People have been mining and gaming on 100% GPU usage for a long time, and the cards lasted for years.

In gaming, if your FPS is high, then there’s usually nothing to worry about. It’s simply a demanding game, and your GPU usage is supposed to be above 95%.

If you want to get your GPU utilization and temps down a bit, then you can try to limit your FPS through software. Great software to do that are MSI Afterburner and Riva Tuner Statistics Server.

Limiting your GPU to be utilized at a certain level, such as 90% can help reduce input lag in some games, and help with latency.

How Much GPU Usage Is Normal?

It will also depend on your GPU and CPU model. If you’ve got a high-end CPU, it should be paired with the equivalent high-end GPU. For example, GTX 1660Ti should probably be paired with something like i5-11400F for optimal performance.

If playing a demanding game, your GPU running at close to 100% is perfectly normal. This is to be expected. That just means the game is utilizing all of your GPU’s available performance.

Because high GPU usage is normal for many demanding games, you should only be concerned if your graphics card usage isn’t high for these games.

It’s nothing to worry about, as long as your GPU temperatures are below 185°F (or 85°C). If the temps are too high (above 185°F/85°C) your performance might degrade over time.

Always make sure you have the latest AMD or Nvidia drivers, especially if you’re doing work on a newer software version, or playing the newest game. I have Nvidia GPU, so I get my drivers directly through GeForce Experience, but you can get drivers manually from the Nvidia website, as well. Driver updates can solve a lot of issues, I’ve experienced it myself many times.

Why Is My GPU Usage So High?

Typically, for any of those higher demanding tasks your GPU usage is high because it’s supposed to be like that, even up to 100%. However, if you’re doing nothing, then there may be something running in the background and using your graphics card.

Even when watching YouTube, your GPU is used to decode video information, so YouTube is using your GPU. The higher the resolution, the more GPU is used. If using GTX 1060 or anything above, this shouldn’t be above 3 to 4% for YouTube on 1080p video.

So if it’s high, there may be some issue in the background or with drivers. Lower-end GPUs will also be used more, especially if paired with lower-end CPUs.

You can use HWiNFO Software to measure GPU, CPU, and every other component usage, temps, and even set up alerts. Great software. By adding a graph you can see in the past how the GPU usage was, and have it in your tray at all times.

You can test your GPU, by doing a GPU benchmark. One of the best tools for measuring and comparing gaming performance is 3DMark Time Spy or Firestrike which is included in the Basic edition of the software. There are GPU, CPU, and combined tests you can choose from in this software.

You can then compare your scores online to see if your GPU is performing as intended.

Why is my GPU usage so high when playing games?

Your GPU usage is high when playing games because it’s how GPU is supposed to be used, especially in demanding games. Even 99-100% is fine if your temperatures and performance are fine (below 185°F and above 60fps).

If any of these aren’t fine then this is either because your GPU may be too weak for the game, a driver update is needed, or the game engine simply taxes your GPU a lot. Some games are optimized to take advantage of your GPU, and this is a good thing.

You can lower your GPU usage by putting a cap on the FPS by enabling Vsync, or with software. You can also try to reduce some of the GPU-intensive options in games, such as shadows, resolution, or DSR.

Why is my GPU usage so high when nothing is running?

When idle, your GPU usage should be at 0% (zero). If your GPU usage is high when idle, then there’s software running in the background. Download Process Hacker and check for any processes using GPU, by ordering processes by GPU usage.

Your GPU usage should never be high when idle, or even above 1%. If you’re getting above 90 or even 100 percent when idle, then some process is doing it. A game may be playing in the background, or your GPU is being used for mining.

In gaming, this may be a good thing, because it means you’re getting the best performance from your GPU, while your CPU isn’t the bottleneck of your system.

High GPU usage and low CPU usage are usually expected when doing GPU demanding tasks such as mining, rendering, or playing games. In gaming, this also means your GPU is the bottleneck, which is a good thing.

What you don’t want is your CPU at 100% while gaming or doing tasks that should be taxing your GPU instead.

Some games tax CPU a lot, such as RPG or any games that have a high draw distance, a lot of actors, or AI for calculation. However, even in these games, your GPU should be used much more than your CPU.

How Do I Fix High GPU Usage?

First, keep in mind that if you’re playing a demanding game, then high GPU usage is a good thing. If you’re not doing anything on your computer, then you can use Process Hacker to diagnose and fix high GPU usage. Here are the steps:

In gaming, one of the possible fixes for high GPU usage is to cap your FPS to 60 or 75 by using Vsync.

Most games nowadays have this option in graphics options in the menu, but you can also limit your FPS through an Nvidia control panel, or software such as MSI Afterburner and Riva Tuner Statistics Server. Capping your FPS lets GPU rest a little, and your temps will be lower as well.

Finally, if your GPU is bottlenecking your system, it might be working too much, and reaching its limits. Bottlenecking means one of your components is incapable of keeping up with other hardware. Unfortunately, the solution for this is to buy a better GPU or to reduce some graphics options.

The GPU is almost always a bottleneck in a gaming PC, this is normal. As long as your performance is ok, there’s nothing to worry about.

Why Is My GPU Usage So Low?

Low GPU usage can be a side effect of a CPU bottleneck. If your CPU is being used a lot, while your GPU usage is low, then you may be getting bottlenecked by your CPU.

In this case, your CPU can’t keep up with the GPU, so your GPU is not being properly used. Your GPU needs to constantly wait on the CPU to finish, and you get low GPU usage. Check your CPU temperatures, if they’re high then this might be the issue.

You could try to fix it with software, but generally, you may need a better CPU. Try i5-11400F or Ryzen 3600. These are one of the best in terms of value and performance.

If playing games, then FPS may be capped in your game through Vsync or software and this could be causing low GPU usage. PS cap is many times a good thing to do, but if you’re satisfied with your gaming performance there’s no need to change anything.

Low GPU usage is normal if you’re idle, watching YouTube, or playing a game that isn’t demanding. It’s normal to have GPU usage in these cases from 1% up to 30%. However, if you’re not getting the performances you should be getting, then there might be a problem, and you may want to explore and fix it.

How Much CPU Usage is Normal?