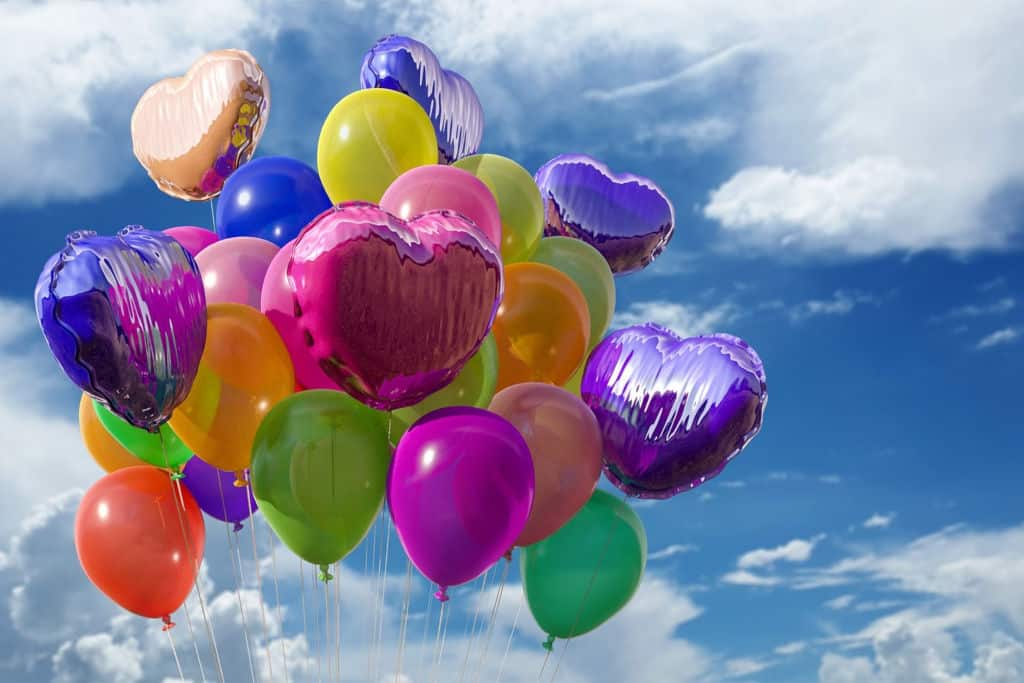 When planning an event, it’s best to do some quick research before buying the balloons. We all want those that float, but also last for day at least. What I discovered, is that there is a big difference in how long they last, depending on a few factors.

How Long Do Helium Balloons Last? For latex, a smaller 9-12” helium balloons will generally last from 8 to 12 hours (2-4x longer with hi-float), while the larger ones can last up to 2-3 days. Foil balloons typically last from 3 to 5 days, up to a few weeks.

The best advice for latex balloons is to get the quality ones, and inflate the balloons a few hours before an event, just to be on the safe side.

The size, as well as the shape, affects the float time. The more helium the balloon has, and the “more round” it is, the longer it will last.

These times may be different for some of the higher quality manufacturers, such as Qualatex, and here are their float times. But, it’s an average for most helium filled balloons.

Let’s take a look at the exact numbers here, and what can we do to make helium filled balloons last much longer than usual.

Generally speaking, yes, your helium balloons will last overnight, but they may not last long enough to have an event the next day.

Last thing you want is to have all the bling and the style up and ready, and your balloon decoration in shambles.

How long will a helium balloon last depends on these factors:

Hi-float is a liquid used to extend the life of the helium balloons. If your balloons are treated with hi-float then they will definitelly last overnight, and will look good the next day as well.

Balloons last longer in an air-conditioned room. If you left a small latex helium balloon outside in heat, it would last only a few hours (up to 10h for the large ones) and may even pop in the first hour.

Also, bigger balloons last much longer. If your helium balloons are latex, of good quality, and spent the night indoors, then it will also probably last overnight.

How Long Do Helium Balloons Last by Type?

There is a big difference in helium filled balloon longevity, based on the material of the balloon, whether they are treated by hi-float, and who manufactured them.

They last from 8 hours up to several days for the large ones. And if you fill them the day before, they may not be there the next day, or may not look as good.

These balloons can be great for your event, but the moment you fill them with helium, it starts to seep out from them, fast.

But, if you’re only using the smaller ones, without hi-float, the best thing you can do is to fill them up as close to the event as possible.

If you use the really large ones, then these latex helium balloons can last much longer depending on the temperature where they spend the day. If you put them inside, then these large ones can float for 2-3 days, even without pre-treating them with hi-float.

Reason why latex balloons last for a shorter time is because they are porous, so helium leaks out of them easily. Foil balloons are less porous, so they last much longer.

Foil (mylar) balloons of around 18” typically last for 3 to 5 days, while the larger ones last for longer, from 1 week up to several weeks.

Foil balloons usually come from 18” and larger, and since they last for at least 3 days, they can safely be filled the day before the event.

But, if you want your foil balloons to be shaped in numbers or alphabet characters, make sure you get 24″ or larger, otherwise they may not float. For example, some 16” Number or Alphabet foil balloons may not fly with helium, because of the shape and weight. Use larger size for these types.

Most of the other types will fly at 25” inches such as cartoon and movie characters, or baby shower characters.

Temperature greatly affects the longevity of the helium filled balloons.

In fact, the hotter it is outside, the shorter the life span of the helium balloon. For the best possible results, keep your balloons indoors, in an air-conditioned room.

Let’s see how the environment affects how long the balloons will last.

How Long Do Hellium Ballons Last In Hot Temperatures?

Latex helium balloons will typically last only 4 to 6 hours under a hot sun.

This is because helium expands in the heat, so it will escape faster from the balloon. These balloons can pop if you leave them in a very hot place, such as in your car during a hot summer day, and even on the sun.

Mylar/Foil balloons will last much longer than latex in the sun, up to 24 hours, sometimes longer. The downside is that they may change the color or sheen.

How Long Do Hellium Balloons Last In The Cold?

Helium filled balloons will last about the same time in cold and in AC chilled room temperature, and that’s around 8-12 hours for an 11” latex balloon.

The only difference is that they will shrink, and won’t look like much.

At around 45-50 degrees (or 7-10°C) helium gas starts to contract, so the balloon starts to shrink. It looks like it’s deflated, but it’s not – it just shrunk. Move it to a warmer place so the helium molecules get the energy boost and expand. The balloon will revert to it’s full shape.

How Long Will a Helium Balloon Last In a Box?

If it’s colder inside the box, and outside the box is hot, then they will last much longer than outside. A 9-12” latex helium filled balloon will last 8 to 12 hours in a box, perhaps longer if it’s of good quality.

Chilled areas are good for balloons, rather than hot or cold areas, because they will retain their helium molecules (will last for long because it’s not hot) and won’t shrink due to cold temperatures.

Here are some of the ways to make your helium balloons last longer:

Hi-Float is a liquid-like coating, a solution of a plastic material dissolved in water that goes inside of the balloon. It spreads on the inside and prevents helium from escaping as easily.

This is definitely the best way to make latex helium balloons last the longest. Hi-float coating is not toxic, and requires a dispenser pump to use. You coat the balloon on the inside with this glue, and it will prevent the helium from escaping so easily.

How Long Does Helium Last in a Tank?

If by “last” you mean how long can it stay in the tank unused, then as long as you need it to. Helium can last in a tank for a long time, Helium does not expire in a tank, nor does it degrade.

If by “last” you mean how many balloons can you fill before it goes empty, then according to Target the standard tank fills up to (30) 9” latex balloons, (16) 11” latex balloons or (16) 18” mylar/foil balloons.

Can You Refill a Helium Tank?

There you have it! I hope you learned something today!

If you have any questions, leave them below.

How Long Should You Wait to Mow the Grass After It Rains?

How Long Does It Take to Tint Car Windows?

How Long Does It Take to Boil Water?