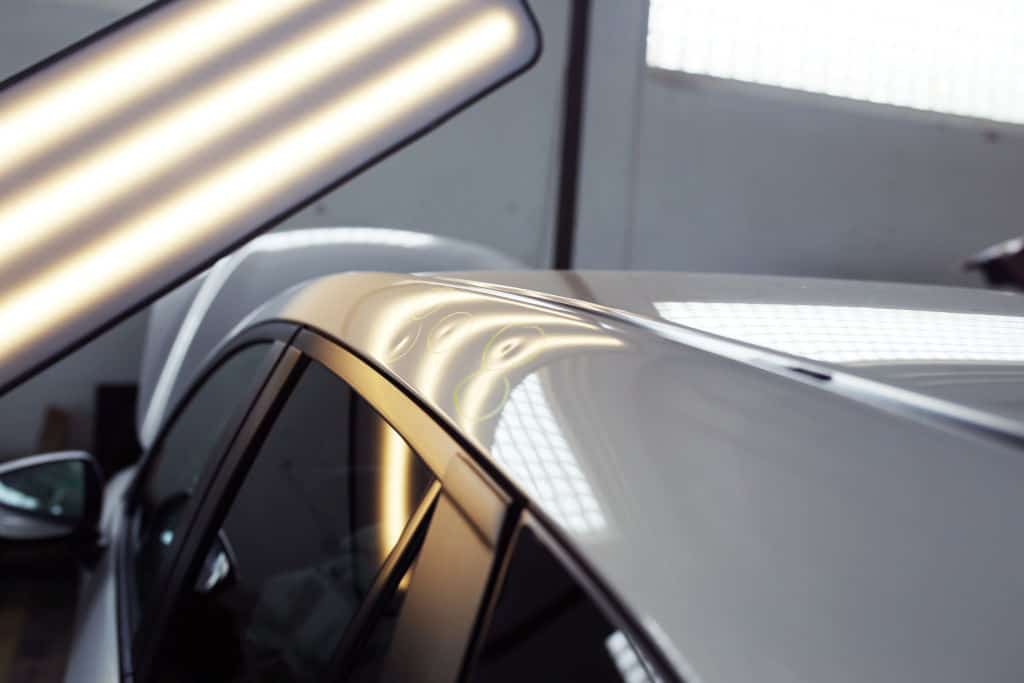 You can’t fix what you can’t see. PDR light is an essential part of paintless dent repair, and most PDR techs have several types of lights in their toolset. Let’s take a closer look at what is PDR light used for, and how it’s used.

What is a PDR Light? We use PDR light during paintless dent repair to better see a dent that needs fixing. The dent will be casting a shadow (fog technique), or bending the lines if using the line technique. We use these shadows and lines to repair the dent using our PDR tools.

The type of light PDR tech will use depends on the technique used, personal preference, and skill.

How to use a PDR Light? PDR light is used in such a way that you’ll be looking at a light reflection on the car itself, and fixing the dent until the dent shadows, or bent lines, completely go away. Dents are pushed from the inside of the car with special tools or pulled from the outside with a pull gun.

Additional tools are used to massage the dents, such as knockdowns, cranes, ratchet handles, bars, and others. I’ve put this quick PDR guide to take look at what is PDR light, how to use it, and the types and techniques when using PDR lights. So let’s take a look.

What are the main types of PDR lights?

Most PDR lights today are LED lights and can be very flexible so you can adjust them in any direction you want. We can distinguish PDR lights by the type of light and by size.

PDR lights by the type of light are:

The usual fog PDR lights mostly consist of three and more strips, which you can adjust and set up depending on your preference and the depth of the dent. With these lights, we use shadows cast by the dent itself to repair the dent.

Line lights/boards cast lines on the car which get distorted when they pass across the dent, which we can use to fix the dents. These lights can be more difficult to learn how to use, however, they are sometimes a bit more precise in repairing the dents. The more lines on the board, or on the reflection on the car, the higher the detail.

PDR types by sizes typically are:

Smaller (mini) lights are best used when starting up to work on a dent, cross-checking, and side panel work. They have suction cups, which hold them attached to a car at any point. They’re almost always portable, very easy to use, but can be inadequate at times.

When the mini light is no longer sufficient, we switch to larger PDR lights such as tail lights, shop lights, and fathead lights. For fixing hail damage with PDR, fathead PDR lights are probably the best choice. Not having to move your light in the middle of hail repair is a great advantage and time saver, and this is where these fatheads are excellent. To learn more about PDR lights, you can check this PDR light guide.

Techniques when using a PDR Light

There are two main techniques when using PDR lights, the fog technique, and the lines technique.

The downside with fog repair can be noticed if working outside, as the sunlight can interfere with the repair. This can be solved with a highly bright PDR light, or a bright reflector board with lines.

The lines technique relies on shining a PDR light that has lines in it so that it casts a bunch of parallel lines on the car, where you use the lines to find the size of the dent based on the line distortion.

The finer the lines are on the light, the more detail the PDR tech is going to see. In other words, the more lines there are, the higher the quality and detail.

How to read the lines? One way to learn the lines technique is to take advice from Myke Toledo and start learning with half-inch lines, then quarter-inch lines, and incrementally move to 16th of inch lines.

One way to make it easier to work with is to decrease the detail of the dent by moving the light closer to the car, so you’ll have fewer lines. A good starting point for that could be quarter-inch lines. As you move on with the repair, you can move the light further away to increase the detail, so you can see more lines and how deep the dent is.

Here’s another video on how to start fixing the dent using the line technique from Myke Toledo:

Here are some basics on paintless dent repair with a light board:

Should you get big or small PDR light?

Which PDR light do you need? You might be asking yourself whether the mini light is worth getting, or should you get the big, shop light? Generally, you will probably need at least one big light, not only if you’re doing hail damage, but also because you’ll be able to work continuously without having to keep moving the light as you go.

Big light is great because you can see a lot of damage, especially if you’re going to be fixing hail damage. So the general advice is to get the big light, as you’ll be much happier with it than with the mini light.

How many PDR lights should you get?

Typically, you’re probably going to need at least two lights, not only because you’ll be able to experiment and see which one suits you best, but also you can use stacked lights, and you can cover a larger surface, which gives you more freedom.

PDR toolset can cost a lot, but so does the cost of paintless dent removal. The better the work you can do, the more customers you can attract, and the more you can charge.

It takes only two minutes to set up a big light, while the small one is immediately ready. Portability can be an issue depending on the light, but you can buy a battery for most of them, and move them around as you please. Stuckey XL big light has a small battery behind it, which makes it completely portable, with no cables to get in the way. Most mini lights are portable without any cables and have suction cups so you can place them anywhere on the car.

If any of these lights are unavailable, you can check other thrustworthy shops, such as A-1 PDR Tools, Keco Tabs and Ultra Dent Tools, which carry many of the same products.

What is a PDR light? PDR light is the main tool during the paintless dent repair process, which allows a PDR tech to see the dents which need to be fixed. With PDR lights dents cast shadows or create lines, which makes it easier to repair car dents.

How to use a PDR light? PDR light is positioned behind the dents, so that the dent casts a shadow or that the light shows lines, which are used to repair the dents with PDR tools. PDR techs use fog or line techniques, depending on the PDR light used.

How Long Does It Take For Leaves To Decompose?

How Long Do Helium Balloons Last?

How Long Does Perfume Last on Clothes?