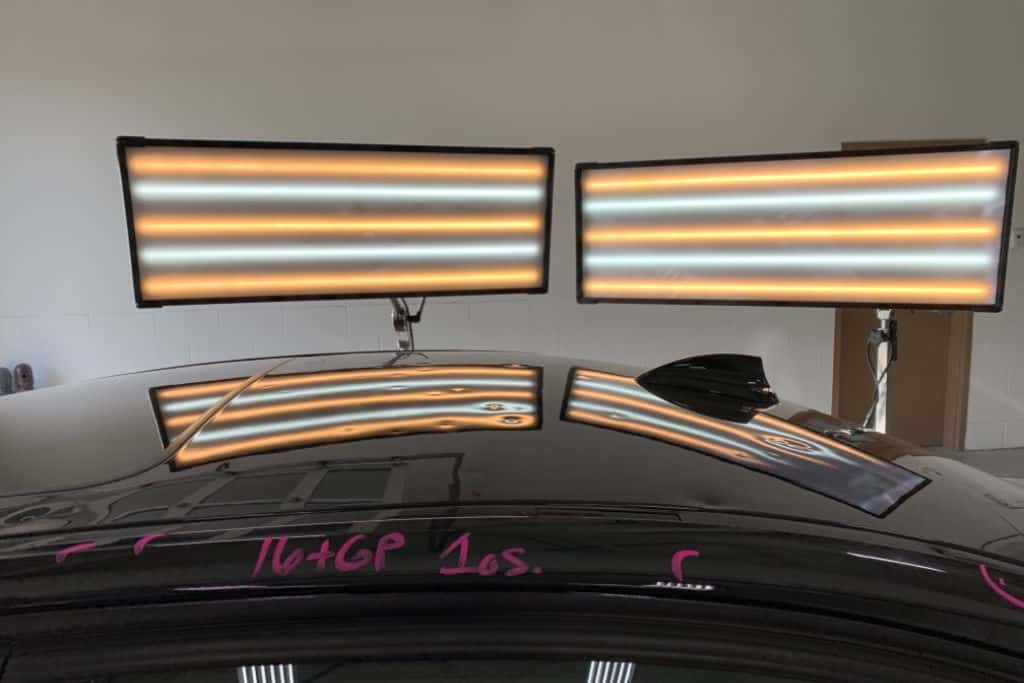 Here’s the thing: to do high-quality PDR work you need high-quality PDR tools, including the best PDR light you can get. This isn’t the niche where you’d want to cheap out, and the higher quality of your tools the more you’ll be able to charge for the PDR work.

Why do you need a special light for PDR repairs? You need a special PDR light because they are specially designed to bring out the dents on the car you’re trying to fix. They have LED strips, dimmers, lines, and various color temperatures, which bring out the size and depth of dents much more accurately than you can ever get with a regular light.

Without it, you’re almost blind. And you can’t fix what you can’t see. The best PDR techs, such as Myke Toledo, advise that with a higher quality PDR light you will always see the difference, and be able to do high quality PDR work.

What kinds of PDR lights are there? Basically, there are two types of lights, fog lights, and line lights. Fog lights are similar to regular lights except they’re specially designed to create a nice, clear shadow and contrast on the dent. Line lights reflect a lot of parallel lines on the car, which we can use to determine the fine detail of the dent, as the lines distort near the dent.

All PDR lights are mostly LED lights, can be customized through different light temperatures and intensity and can be dimmed as well.

What kind of PDR light should you get? General advice is to get at least one big light, as you’ll be much happier with it, than with a mini light. Whether it’s a fog or line light depends on how familiar are you with it. Typically, fog lights are easier to use than line lights, but not for everyone. So if you’re just starting out, getting a fog light might be a good choice, but a simple line board can be a good starting point as well.

How many lights do you need? If you’re just starting out, mini fog light or a reflector board is a good starting point. If you’re creating a business, then getting at least one big light is essential. You’re probably going to need at least two lights because you’ll be able to cover multiple dents without having to move the light constantly. Most PDR techs have several lights in their toolset.

For those looking for cheaper options, I’ve included a few budget PDR lights that I’ve managed to find to be of good quality.

What are the best PDR lights and PDR light boards in 2021?

Probably the best PDR hail light out there, the Stuckey XL provides tight, crisp fade and ability to see much deeper dents than almost any other light. Comes with 6 LED strips WC WC WC, which gives extra-crisp fade, and is simply a fantastic light. Some would call it the best portable PDR light. Stuckey XL is out of stock at stuckeytools, but available at PDR tools as well. Costs $599.

Elimadent provides high quality PDR lights, at the same level as Stuckey, but gives a slightly different fade. This is a PDR fog board, so it gives a nice, modern “soft” fade.

Another great product from Stuckey, and one of the best portable PDR lights. Stuckey mini has the same quality as the Stuckey XL, except this is a mini light, smaller.

This 14” PDR light board comes with 3 strip LED lights and a PWM dimmer. It can be rotated by 360 degrees, so you can position them any way you need to, which makes it very convenient to use.

The battery and charger are sold separately, but it’s worth the price. They can last 4 to 10 hours and can be charged in 15 to 40 minutes. Generally, Elim A Dent are high-quality lights, and this is no exception. You can also use existing Makita chargers and batteries. Completely cordless.

This fathead light is a high quality PDR light, in the range of DNE Maksmaster, though doesn’t come with a stand or any other accessories on Pro PDR Solutions, however you can get it with a stand from PDR tool. It has 6 LED Strips, wc wc wc, and a dimmer. You can also get a different LED configuration if this one doesn’t suit you.

This is a well-built 6 LED PDR light, with an excellent fade, and is fairly light. Comes with 3 cold and 3 white strips, which you can adjust any way you like. Comes with a dimmer, a stand, and crocodile clamps. And that’s the main difference from others on this list, as it is a PDR light with stand.

The fade it produces is excellent, and price/performance wise this is a great buy.

This Ver-3 Makita is an improved version of Makita Ver-2. The main improvements are 6 LED strips with 3 warm white 3 cool white, and 6 independent switches for each individual LED strip. It is cordless PDR light and comes with a dimmer. A bit large for a mini light, and a bit pricey, but high quality nonetheless.

If any of the other ones are too expensive, this is a pretty good light from Dent Magic Tools and is only $199. It comes with 3 LED switches in the configuration: warm, cool white, warm, and is a great beginner PDR light.

Being a mini PDR light, it comes with a suction cup, but also a 25 Foot Cord with PC-128 110v converter to allow use in a car or wall outlet. All in all, a solid PDR light.

Amazingly bright, this PDR reflector board is one of the best, because you can get different detail with 1/4 inch and 8th inch of size. It’s very flexible and has a rubber bumper so you can’t scratch your car while using it. This is probably the best budget PDR light you can get. I put an asterisk (*) because the loc line and suc cup cost an additional $135, and it can total up to $270 with all the parts.

Solid quality, yet cheap – this PDR light board from Amazon seems to be able to do the job well, especially for beginners. This board is 13” x 8.3” with an adjustment holder, so you can position it just like the other mini boards out there.

If any of these lights are unavailable, you can check other thrustworthy shops, such as A-1 PDR Tools, Keco Tabs and Ultra Dent Tools, which carry many of the same products.

What’s the best way to use PDR lights?

First, check this post to learn more about PDR lights. For the newcomers, the proper way to use a PDR light must be learned slowly, and patiently. As you learn, you’ll get familiar with different lights and different settings, and will eventually know what suits you best.

You can start with a reflector board or a mini fog light and follow some helpful PDR Youtube videos to learn how to repair the dents. Almost every video is different, so you’ll just have to watch as many as you can. Then go to a junkyard, and start fixing some dents. Learning from a PDR tech in your area is probably the best way to go, and is greatly beneficial.

How to learn the line technique?

From the advice by Myke Toledo, you can start learning with half-inch lines, then quarter-inch lines, and slowly move all the way to 16th of an inch line. The incremental move from thicker to thinner lines is a good way to get familiar with the lines from the start.

To decrease the detail of the dent and make it easier to start working on, you can move the light closer to the car. This way you get fewer lines and it’s easier to start with. A good starting point could be the quarter inch lines. As you slowly learn and get more familiar with the dent and the PDR light itself, you can move the light further away to increase the detail, so you can see more lines and see the size and depth more clearly.

Here’s a good video on how to start fixing the dent using the lines technique from Myke Toledo:

And here’s another video on how to read the lines for PDR using a reflector board:

How Long Should You Wait to Mow the Grass After It Rains?

How Long Does It Take for a Pearl to Form?

How Long Does It Take to Boil Water?

How Much Does a Shipping Container Cost?