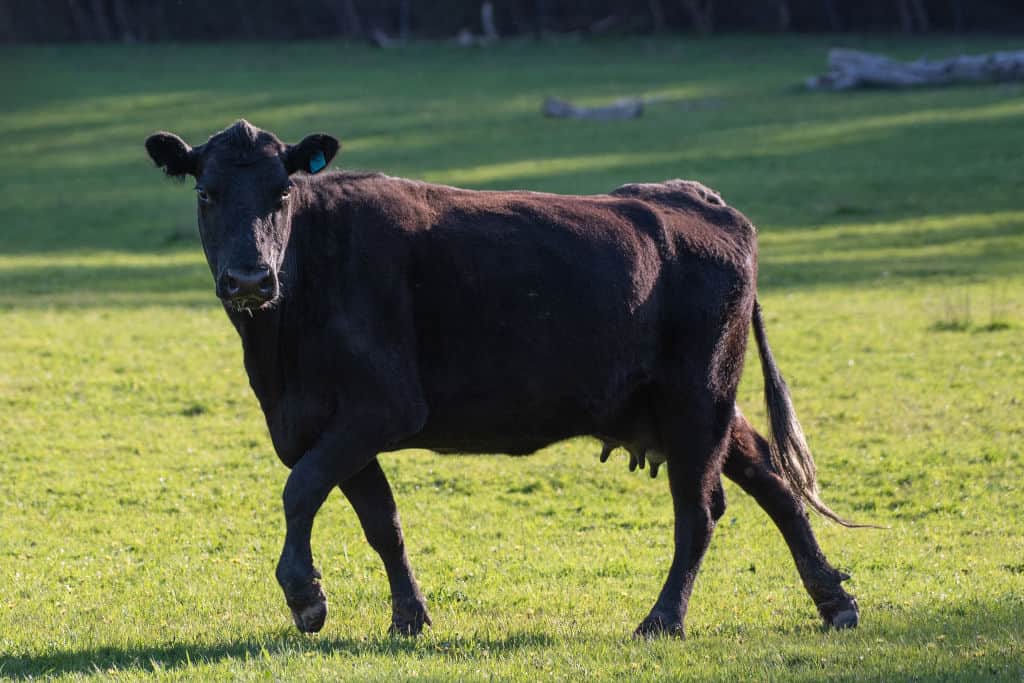 Cows greatly vary in weight depending mostly on the breed and the age of the cow.

According to North Dakota State University data, the weight ranges greatly for a typical herd. There’s no one average number for all the breeds combined, but… For now, let’s try to answer the general question about the average weight of a cow.

For example, Holstein dairy cows are one of the larger ones, and usually weigh about 1,500 pounds fully grown, while Jersey dairy cows are on the smaller side, weighing about 900 pounds on average, when full-grown.

We can separate the weights relative to the age and the breed of the cow, as shown below.

If you’re looking to get into beef productions business then it’s important to have the right equipment, such as feed bunks, hay feeders (portable even better), headgate, holding chute, working chute, and a few other important items.

How Much Does a Cow Weigh?

I’ve used data from research and calculations on The Pennsylvania State University, North Dakota State University and Wikipedia itself to get the most accurate and recent data about cow weights (by age and by gender).

I’ve used this data to put together tables of weights for heifers (female calves) by month, and some data on the major breeds in US and their average weights.

Herders always weigh a cow at weaning, which is the time when a calf is separated from the mother. Ideally, this is at 7-8 months old. Cows continue gaining weight until they reach 7 years of age, then they slowly lose weight until they leave the herd.

Weight of a cow depends mostly on these factors:

This means the weights can range wildly, but, we can still take the averages to be useful, based on the large available data set.

These averages should be helpful, or at least, interesting to ponder about.

For more information on the breeds of beef cattle, visit the Oklahoma State Beef Breeds Directory.

How Much Does a Beef Cow Weigh?

A typical beef cow such as Angus, weigh around 1210 lbs (550kb) for a mature female, and around 1870 lbs (850 kg) for bulls (on average). For a typical herd, this is not a very useful answer because the herd may consist of a variety of cows by age and breed.

Cow weight will greatly vary based on many factors.

Angus beef cow will be about 450-550 pounds when 6 months old, while a mature heifer could weigh anywhere between 800 and 1400 pounds. Heifer growth is usually compared to breed standards to determine normal progress.

Here is a list of average weight of beef cows by breed (female):

If you are looking to get into beef production business (or are there already) then the general answer to a general question is not that useful for you.

What’s more important is the weight of cows you are turning out to pasture.

In an ideal world, you’d want to hit 1150 lbs in 15-16 months for a typical beef cow, but this would depend a lot on genetics and breed, and is difficult to reach.

How much do cows weigh in a typical herd?

At NDSU Dickinson Research Extension Center, they monitor cow weight throughout the years, and here is the data from a few years ago on the weights of cows in the herd:

This herd was a combination of Angus, Red Angus and Hereford breeding, with the lighter weight cows showing the influence of Lowline breeding.

Knowing the weight of the cows being turned out to grass is something every producer needs to know, and it is a cornerstone for good management.

How Much Does a Dairy Cow Weigh?

These are all (naturally) female cow weight examples, while the males usually weigh more.

Here is a list of average weight of dairy cow by breed – female:

As you can see, there is no one single answer to a weight of an averagy dairy cow accross all breeds.

How Much Does a Calf Weigh?

A calf is a young domestic cattle, and their weight quickly grows every month.

Calf at birth will weigh about 82 pounds. A commercial steer (bull calf) is expected to put on about 71 to 79 lbs (32-36kg) per month, while a heifer puts on less, depending on the breed.

I’ve looked more closely into dairy cow heifer weights by age, and got the data from PennState Uni on heifer growth and the average and recommended weights of the most popular dairy cow breeds in the US.

Data is from measuring a large number of heifers of various breeds throughout the United States during 1991 and 1992. Calculations are done by PennState Extension at the College of Agricultural Sciences, The Pennsylvania State University, and updated in 2017.

How Much Does a Cow Weigh When Butchered?

For commercial productions, cows weigh usually 900 to 1,350 pounds at slaughter. The average cattle weight at slaughter will depend on customer demands, which determine the age range and weight of cattle.

For example, Angus beef cattle weigh around 1,200 pounds at slaughter, with a carcass weight of 750 pounds (hanging weight, “on the rail”).

However, cattle have variations in body size, and customer demands are always different. Some want meat from younger cows, as it is generally more tender, and some want veal meat, which is a meat from a calf that is 6 months or younger.

Average cow weight at slaughter can therefore be on any point of the spectrum of this range of weights.

The carcass size is relevant because it is a driver of income.

If you’re looking to get into beef production business, the sole source of your income will come from calves produced each year, which is why it is important that your cows produce a calf at least every 12 months.

Another important thing is to decide what kind of operation you’re going to run. Some of the typical ones are:

Whatever you choose, there are plenty of resources out there that will help you run your business successfully. You can start at PennState Extension beef production guidelines.

How Much Meat Do You Get From a Cow?

According to South Dakota State University Extension, the expected yield for retail cuts from beef carcasses ranges from 55% to 75%, depending on the fatness, muscling of the animal, and the type of cuts you produce. The carcass weight is usually between 600 and 900 pounds.

Steaks usually come from a steer (castrated male) or a heifer (female that hasn’t been bred), while meat from cows is usually ground up into processed meats.

The US beef industry is focused mostly on producing steers for meat consumption.

Dairy cows are better utilized on producing milk, and because of their inability to dress out nicely (give large quantities of quality meat), cow is graded low by the USDA and normally goes to auction and slaughter for processed meat.

One of the most popular cattle breeds, Angus, has been used for a long time because it gives lots of prime grade meat, good marbling, etc.

How much meat do you get from a cow?

The amount of meat you get from cattle varies, and this is just an approximation.

How much meat will a cow yield depends on the breed, age and diet.

How Many Steaks in a Cow?

Once again, for those unfamiliar, steaks generally come from steer (male cows) while the meat from female cows is generally ground up and considered lower grade.

Let’s take a look at two examples and the amount of meat you can get.

If we use the example above for a 1,200 pounds steer, from SDSU Extension, and cut the carcass into primarily boneless steaks and roasts, we would get (on average):

For individual types of steak, you would get:

Another example of 1,000 lb. as shown by Oklahoma Department of Agriculture Food and Forestry gives similar results.

Their average hanging weight, also called “on the rail” is 61%, for a 1,000 pounds steer, which is 610 lbs of beef. Further weight loss for meat accounts for 18%, which leaves you with 430 pounds of meat that would go into retail cuts (steaks, roasts, ground beef, etc.)

Here is the amount of retail cuts you would get:

These are just the averages, and the actual live weight to retail cuts yield varies, depending on breed, fat to muscle ration, age, cutting order, etc.

Largest Cows in the World

The heaviest breed of a cow in the world is Chianina, which can weigh up to 3,500 pounds when mature, or 1500kg.

It is one of the oldest cattle breeds in the world and it’s use is dual-purpose: both for meat and for draught use (working animal). Chianina cows have very little milk to produce, barely sufficient for suckling.

Second one largest is probably South Devon, which is the largest of the British native breeds.

Smallest Cows in the World

The Dexter breed originated in Ireland, then was brought to UK and US. It then eventually disappeared from Ireland, but was still maintained as a pure breed in a a number of small herds in England and the US.

Dexter cows are friendly, dual-purpose breed, used for milk and beef, but often also used for oxen, which is an animal used for plowing, transport, threshing grain by trampling and powering machines that grind grain or supply irrigation.

Their versatility is one of their greatest assets, and they also produce a rich milk high in butterfat.

How Long Do Bed Bugs Live?

How Long Are Cats in Heat? (What You Can do)

How Many Teeth Do Sharks Have? (with 13 examples)

How Long Does It Take for a Pearl to Form?