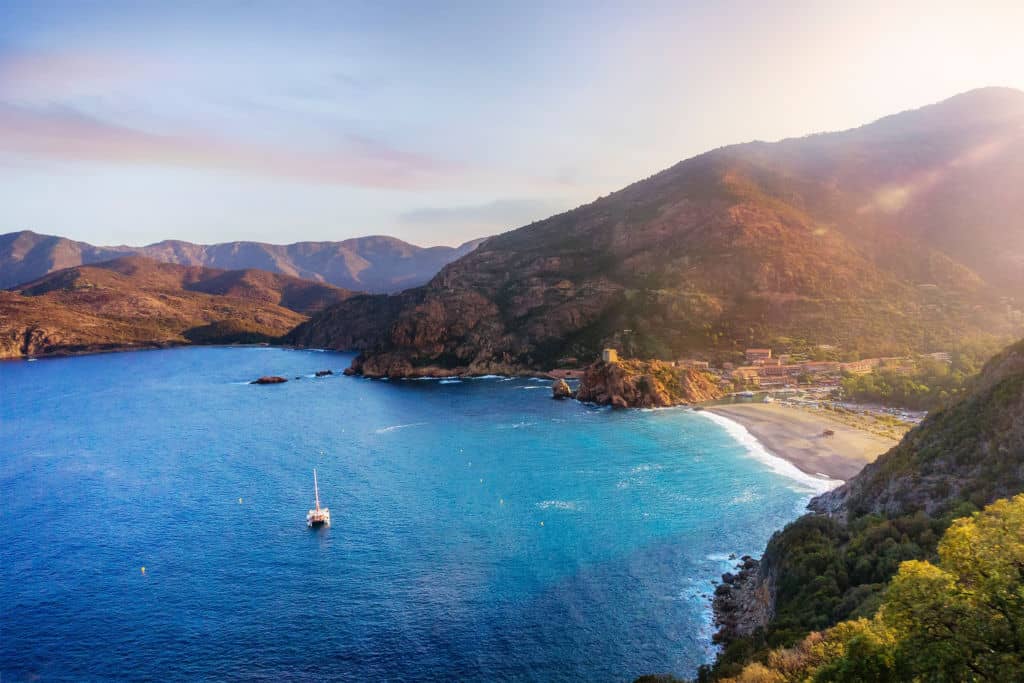 Do you have a boat on your trailer, but looking to widen your horizons? Sailing around the world is an eye-opening experience, whether you do it on a sailboat or a powerboat.

How Long to Sail Around the World? Sailing around the world takes about 15 months with a straightforward route, up to a few years if you wanted to further slow things down and absorb the experience. It can take even up to 10 years, all depending on how much time you have.

Keep in mind that 15 months still gives you considerable time and flexibility for sightseeing, and any significant change in the timescale will add an entire year to your journey. For example, the popular World ARC rally takes 15 months.

However, circumnavigating for a longer time (3+ years) gives you much more time to absorb the experience, and not rush things through. Deviating from a 15-month circumnavigation can add a whole year to your journey because of the storm seasons that you need to avoid while sailing. Experienced seafarers can outrun them, and if you learn from them, then you could do it too.

How Long to Sail Around the World – Routes

You can create your own route, or sail the already popular and known routes. Most of the circumnavigation routes are the same and for good reasons.

When planning routes around the world keep in mind: the tropical storms that you need to avoid, and piracy areas because of safety, and because insurance may not cover those areas.

Here’s one example of a 15-month circumnavigation route through months:

Check out some examples of people who sail around the world.

Any notable stop adds a year to the circumnavigation route because of the weather and storm seasons. To sail a bit longer, maybe in the South Pacific, you could spend the summer in New Zealand (December – April) and then you would have a few extra months in the South Pacific.

Cost to Sail Around the World

Before we get into the budgeting for your boat, you should know that you can sail the world on other people’s boats as well. You don’t even need to buy a boat if you don’t have the budget. Check below on how to gain experience and sail around the world[LINK].

If you decide to buy a boat, here’s the average cost to sail around the world.

Speaking of a monthly budget, it generally costs $1,500 to $3,000 per month to sail around the world comfortably. This includes all the expenses that you would normally have, sailing the Caribbean or Europe, for example. If you plan to go out in every city, and you plan to stop a lot, then you should include $500-1000 more.

The boat will cost from $10,000 used, towards $30,000 and upwards for new ones. You can pay less for a smaller and slightly used boat. Most boats will cost considerably more.

Your biggest cost for planning to circumnavigate would be the equipment you’re going to buy, which makes your offshore passages safer and more enjoyable. Equipment could cost $15,000-20,000, but varies.

You should have an emergency fund of at least a few thousand dollars.

Engine and autopilot repairs can cost $1000-2000 on average, depending.

Additional costs could are costs to transit the Panama Canal, for around $1500, or choose the sail against the wind around either North America or South America.

If you’re planning on spending less and want a more realistic monthly budget, then $1000-1500 a month should be enough for most circumnavigation trips. You just have to be careful with provisioning and not go eat out at the restaurants every time you dock. Spend some more time at the anchor and do some repairs by yourself.

These are just approximate, and costs will vary depending on your plan, boat, route, and other factors.

The world record for sailing around the world is 40 days 23 hours and 30 minutes, set by skipper Francis Joyon in Trimaran on January 2017. It had 6 crew and sailed the eastward route (east to west).

For single-handed on the eastward route, the world record for sailing around the world is 42 days 16 hours and 40 minutes set by French skipper Francois Gabart in 100ft Trimaran in 2017.

The westward routes are more demanding, as it faces the dominant winds and currents. There are fewer attempts and records. Single-handed record for circumnavigation on the westward route is 122 days in 2004.

Races to Sail Around the World

Many sailing races go around the world, and the most famous ones are:

Best Boats to Sail Around the World

Today’s circumnavigation routes are filled with 40, 50, and 60+ foot boats, which doesn’t mean you can’t sail the world in smaller sailboats. Obviously, these sailboats are much bigger than the ones sitting on a trailer in your garage.

The size depends on your budget and the size of the crew. A boat that’s too large for easy handling by a shorthanded crew is as much of a problem as a boat that’s too small to be comfortable.

Smaller displacement monohulls are always going to be slower than larger ones, and therefore having to sail longer from one point to another, making them vulnerable to changes in weather. They may be cheaper to maintain and easier to sail, but they also offer less space for comfort and storage.

Some of the good choices for smaller ones are Dufour 29, Vancouver 28, Westsail 28, Cape Dory 28. However, usually, the 40’+ are recommended.

Larger sailing boats offer more living space and comfort but require a larger crew. They offer more storage space and are faster, but are also more expensive both when buying, and maintaining.

If you’re going the usual Tradewind routes to sail the world, then typically a catamaran will be a good choice, as cats will perform best downwind. But keep in mind that big catamarans can be very expensive. A good starting choice for a boat would be a 46+ feet catamaran.

Sail Around the World Solo, or Join a Rally?

A general piece of advice is that you shouldn’t do it alone.

You can do it solo, and by “solo” I mean with at least another person in the boat, not just by yourself. It may be best to join a rally to sail around the world for the first time, which is safer and reduces many risks.

Many dangers exist on the oceans, and you need to be prepared for all kinds of scenarios. Sailing with another person and in a group gives you both safety and fast assistance if needed, which you will need. If something happens to you, in the ocean being all alone, it may take quite some time for the rescuers to get to you. Sometimes, even a few weeks.

You need to be self-sufficient and able to give yourself medical assistance and do everything needed on board.

Risks for sailing solo are greater, therefore it may be best to join a rally for your first sail around the world. World ARC is an excellent rally that starts from Saint Lucia and Australia, takes 15 months, and goes 26000 NM on a Tradewind circumnavigation.

For the World ARC, the minimum boat size is 40ft but smaller boats will be considered. The circumnavigation goes from Saint Lucia back to Saint Lucia and takes 15 months. If starting and finishing in Europe then allow 24 months. The rally avoids regions of political instability, piracy, and the storm seasons in both hemispheres. You can join in Santa Lucia or Australia and feel safe that you’re in a group.

Sailing with other team members provides an enjoyable pace on the voyage. You also have the option of going a full circumnavigation in a team or doing half the rally.

To know the full details such as the cost and other requirements contact WCC Club.

How to Gain Experience and Sail Around the World?

Joining races at yacht clubs is a great way to gain some experience, which can eventually lead to sailing yourself around the world with another crew.

It’s safer, easier and doesn’t cost much is because you don’t buy a boat, but sail on other people’s boats.

Most yacht clubs have informal races regularly, and some boats are looking for a crew. You can find a boat that you like and try to be regular and dependable. You will learn a lot, but it may also be smart to take some sailing lessons, and read a good book on sailing.

As you gain experience and make contacts from racing, you’ll eventually find someone who is sailing somewhere distant and needs a crew. They may do a delivery of some kind, which could last from a few hours to a few months, depending on the distance.

You start by working on small deliveries and work your way up to larger ones.

Boats in longer races are also looking for a crew. For example, Transpa/Paccup/Vic-Maui are all races to Hawai that you can join, which last a couple of weeks of seat time. Most of these race crews will take a lot of prep work, shake-down cruises, etc. before the race even starts. You can join in, and learn a lot.

You won’t get paid, you will offer free labor, but you’ll be able to sail as much as you want. Plus, learning and getting experience is valued a lot, from maintenance and repair to knowing how boat systems work and being useful.

These skills are extremely valuable. It would be smart to keep the record of all the races you did, including the repairs and maintenance you did on which ship, with how many crew, etc. You could use this in your resume someday.

Once you’ve gained some experience this way, you’ll be attractive to cruisers who need to fill out their crew roster for ocean sailing. You’ll mostly have to share the expenses but you’ll be able to sail anywhere you want from this point.

Tips to Sail Around the World

First, be aware of the oceans strong currents such as:

Major ocean currents mostly flow with the trade winds which makes them helpful (except for about 500 miles around South Africa).

When planning your circumnavigation routes, these currents must be taken into account, especially in a situation of adverse wind. In the situations where the wind is going against the current, it will create a troublesome situation, with a potentially dangerous sea-state.

By far, the important thing is to avoid tropical storms. Make sure you are moving quickly enough to pass through the storm zone in any of the areas they appear. Your entire sailing adventure will be dictated by weather and you need to learn how to adapt to it.

Also, make sure your sailboat is covered by insurance, so you have a piece of mind regarding this.

Sailing around the world can be demanding, so make sure to decide what you want, and learn about it so that you know what to expect from it.